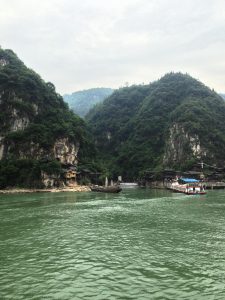 Wu Gorge is the middle gorge of the Three Gorges, also known as the Great Gorge, the longest one of the Three Gorges. Standing on the cruise ship, you can clearly see the ancient plank road on the cliff. In the Three Gorges, the Wu Gorge is famous for its beauty. The immersive experience is really beautiful and suffocating. The famous “Wushan Twelve Peaks” is located in this gorge, with six peaks on each side of the river. The most fascinating is the goddess peak. Legend has it that the beautiful stone pillars and the clouds and rains peaks accompanying her are the incarnations of the heavenly fairies who help Dayu to control the water and navigate the boaters. These peaks are graceful and people take twelve wonderful names for them according to their own appearances.

The Three Gorges water storage has advantages and disadvantages. As far as the Wu Gorge is concerned, after the water level of the Three Gorges has increased, it has not had much impact on the scenery. On the contrary, the deeper canyon landscapes such as the Shennv River have been developed, which adds more singularity and wildness for the trip to Wu Gorge. 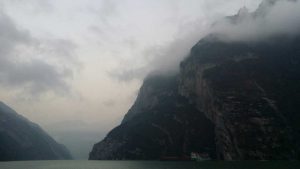 The Wu Gorge is the longest and most neat gorge in the Three Gorges of the Yangtze River. The green hills along the coast are continuous and the peaks are like a screen. When you are on the boat trip watching the green hills on both sides, you may have the feeling of ghosting, which is incredible!