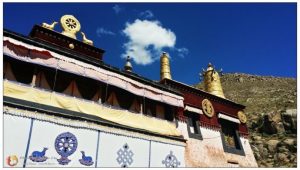 Sera, means the wild rose. Buddha and flowers have always had some mysterious connection. Where does the wild rose bloom, and does the temple site have any meaning?

All the temples in Tibet have debates, but the debate of Sera Monastery is the most famous for their sacredness, which is due to its scale and standardization and the intense degree. Every day at 15:00 pm, Sera Monastery has a large-scale debate activity to examine the extent to which the monks learn and understand Dharma. Many monks sit around in an orderly manner, and outsiders can arbitrarily watch and observe the rules of the debate field (such as not entering the center of the field, not loudly, not using a squatting cushion, not taking pictures, etc.) It is said that the debate is necessary way to pass the Geshe degree, which is the highest degree in Dharma.

The debate field can’t be photographed with a camera (taking photo with mobile phone is allowed), and the entire debate activity lasts for a long time. Although laymen can’t understand what they are debating, they can deeply feel the solemnity of the whole event from their swaying tone, exaggerated body language, and argument, silent scenes and numerous onlookers. As a materialist, even if there is no common belief, there will be a speculation and ecstasy here, leaving the fragrance of the rose flower.

In addition to watching the debate, the Sera Monastery itself is also a very large temple. Walking around and turning around, maybe a corner can surprise you. There are all kinds of beautiful Thangka murals in the hall, but you can’t take pictures. 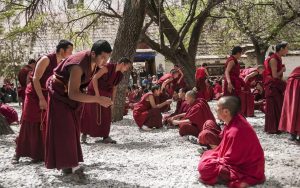 The architecture of the Sera Monastery is particularly scattered. Although it is cluttered, it is still divided according to its function. It inadvertently wraps around the living area where the Lama lives. Most of the houses are mainly yellow. Under the blue sky, it is particularly contrasting. If you like the Buddha culture, just don’t forget make a trip to the Sera Monastery.