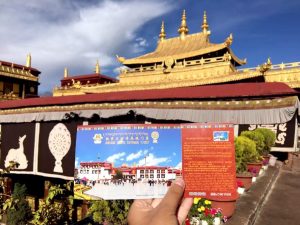 In the clockwise order, it is the Buddhist temple dedicated to the master of the Yellow Church, Tsongkhapa, and his eight disciples. Continue to the right and go straight through the two sides of the Yaksha Temple and the Dragon King Hall, and behind hundreds of ghee lamps, it is the famous “Jokhang” Hall. It is both the main body of the Jokhang Temple and the essence of the Jokhang Temple. The central part of Jokhang hall is the Great Hall. It is the place where the Lamas practice in the weekdays. There are many small halls around. The most important one that cannot be missed is the Sakyamuni Buddha Hall in the middle, where the golden statue of sakyamuni at the age of twelve brought by princess wencheng is enshrined here, and it is the core of the Jokhang Temple and the holy place for the pilgrims. 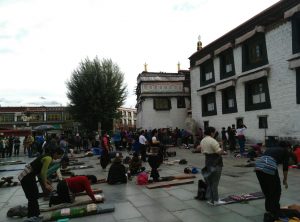 There are stairs to the second and third floors next to the courtyard. On the second floor, there are the royal palaces dedicated to the Tibetan king Songtsan Gambo, the Princess Wencheng, the princess Chizun, and the Pandan Ram Temple guarding the auspicious mother. Standing on the wide terrace on the second floor, overlooking the Potala Palace, it is a great location for taking pictures. The Golden Summit on the third floor is also one of the highlights of the Jokhang Temple, but the third floor is not open to the public most of the time.