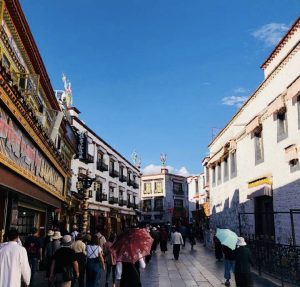 Barkhor Street is the oldest street in Lhasa. It is also a typical representative of Tibetan architecture in the old city of Lhasa. The Tibetans refer to this street of Lhasa as a “holy road”, which shows its status. Today’s Barkhor Street, blending traditional and modern, Eastern and Western, religious and prosperous high-quality economy, is a window to understand Tibet, and the most interesting old street in Lhasa. However, if you want to avoid the peak of the crowd and enjoy the Tibetan style alleys, please hurry up in the morning and follow the local people who have turned up early before the stalls to feel the piety and tranquility. Of course, the lively Barkhor Street is full of Tibetan customs.

Being one of the must-see attractions of Lhasa, Barkhor Street is also the tourist commercial street surrounded by Jokhang Temple. The buildings on both sides of the street are not high. They are all Tibetan style. There are many tourists during the day. The street shops are mainly selling Tibetan cultural goods and tourist souvenirs. It is also the main place for Tibetans to pay homage to Buddhist affairs. You will often meet devout people kowtowing, among which there are many young people, and the elders with children, especially at the entrance of the Jokhang Temple, they are really so many devout people. If you like quietness, you can come there in the evening. The landscape lights on both sides of the street are bright, which makes the Barkhor Street more beautiful. After walking in a clockwise direction, your heart will be still quiet and enjoyable. 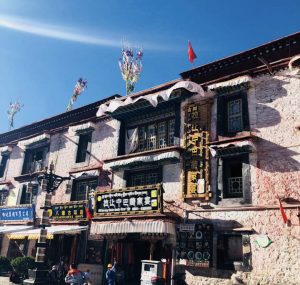